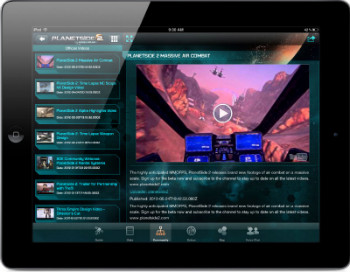 AppBurst's upcoming PlanetSide 2 Mobile Uplink App was just featured in IGN's "8 Reasons Gamers Should Own a Tablet". Check out the quote below:

Sony's MMOFPS [massively multiplayer online first-person shooter] is so big that a companion app that acts as a game-guide just makes a lot of sense, which is what the Mobile Uplink App will be. But on top of accessing your stats and showing off handy hints, it'll present a live view of the game that you can use to assist your team-mates. You'll have a dynamic view of the server's map, that you can use to pin-point sections that are vulnerable and in need of defence or attack. That's good, but it goes one step further and enables the person watching the map to dial into the game's VOIP, meaning you can hop on and tell your team what's going on.

IGN joins other notable sites such as GameSpy and PC Gamer in praising the AppBurst-developed mobile app, which was unveiled at E3 in Los Angeles earlier this year. The PlanetSide 2 Mobile Uplink App is being developed in conjunction with Sony Online Entertainment and provides players of the MMO FPS computer game with a host of impressive features to utilize during gameplay, including an extensive gaming guide, character profiles, interactive map, voice chat, videos, Twitter integration, and more. Stay tuned for screenshots of the Android version, as well as news regarding the app's release date.