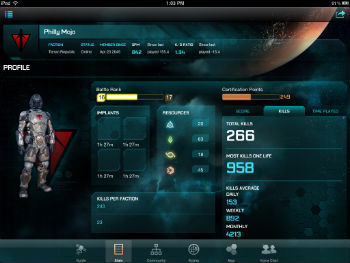 AppBurst, in conjunction with Sony Online Entertainment, has announced the release of a mobile application for the upcoming PC game PlanetSide 2 at the Electronics Entertainment Expo (E3) in Los Angeles, California. The app, entitled PlanetSide 2 Mobile Uplink, will serve as a companion during gameplay and enable users to interact with the PlanetSide 2 community on the go.  An extensive gaming guide, character profiles, interactive map, voice chat, and more will give users instant access to a host of tools aimed to keep gamers engaged.

PlanetSide 2 is a sequel to the 2003-released PlanetSide and is described as a massively-multiplayer online first-person-shooter (MMOFPS) game; combining a large multiplayer world with gameplay similar to popular shooting games such as the Call of Duty and Halo series. The game chronicles a story of three warring factions who fight for control over the planet Auraxis.

The App4Games team traveled to Los Angeles to be a part of E3 and announce the application to the gaming community. AppBurst, the parent company of Apps4Games, worked closely with Sony Online Entertainment to develop the app and provide gamers with a new, dynamic way to enhance their PC gaming experience.