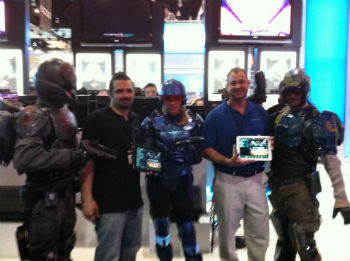 AppBurst headed to E3 last week to announce the launch of the PlanetSide 2 Mobile Uplink App in conjunction with Sony Online Entertainment. The mobile application will be released later this year for iPad, iPhone, and Android devices and serve as a mobile companion to the PC game PlanetSide 2. The AppBurst team had a great time in Los Angeles and more importantly came back with a handful of positive reviews related to the mobile app.

"I say this as someone with a general distaste for mobile tie-ins and parallel apps, but SOE showed off a genuinely impressive PS2 iOS/Android/web app that, in addition to serving as a wiki for weapons and faction information, shows territory control in real-time and allows you to join VOIP channels without being in-game."

"I can’t go further without mentioning possibly the absolute best use of a tablet or smartphone I have ever seen in any arena… At launch, there will be apps for Android and iOS which provide a number of windows into the current state of your server, such as the ever-changing territory maps, player stats, and much more.

Planetside 2 has VoIP built into the game… and into the app. You heard me right, you can completely control your VoIP chat through the touchscreen, your voice is transmitted through the microphone on the tablet (or phone), and everyone elses’ voices are played back through the speakers… the ability to quickly and accurately switch between groups to give commands in the heat of a battle involving hundreds of players can easily mean the difference between victory and defeat."

Needless to say, we're happy with the initial responses! Keep checking back for more blog posts on the Planetside 2 Mobile Uplink App and for additional apps in our growing lineup of Apps4Games. AppBurst is looking forward to attending E3 in future years as we continue developing mobile gaming guides and companion apps for the video game industry.